On Sunday, December 15th, 2019, I was staffing a booth at KwanzaaFest and looked up to see an elderly white man wearing a MAGA (Make America Great Again) baseball cap. I was pissed! How dare this man show up at a cultural event that is 90% African-American, 5% Hispanic, 3% Caucasian, and 2% Asian wearing that hat. I felt like he was there to cause trouble or flaunt his position. I ignored him the first time he passed my booth but then I remembered Random Acts of Interaction. I remembered to suspend judgment based on the training I’d had in Visible Unity’s Unity Process. This was a perfect time to engage someone whose views were different than mine. I beckoned the man over. He complied. This is how the short (this is what we writers call foreshadowing) conversation went.

Me: I notice your hat.

Me: No! Are you a Trump supporter?

Him: The economy is doing exceptionally well under Trump’s leadership. Unemployment is the lowest it’s ever been. The GDP is the best it’s ever been. Trump put a stop to China stealing our intellectual property. He’s spearheading NAFTA 2.0, which will improve the economies of America, Canada, and Mexico.

Me: The only key legislature he’s passed is a tax break for him and his rich friends. NAFTA was a disaster for the economy of Mexico. What makes you think NAFTA 2.0 will be better?

Him: He is an excellent businessman. He owns 1,200 businesses.

Me: (At this point, MAGA-man was getting heated and I was too. I felt there was no point in mentioning all the bankruptcies, the fact no American banks will lend to him, all the lawsuits, and on, and on, and on… I understood there would be no finding common ground on Trump’s “leadership or business acumen.” I switch topics.) What news stations do you listen to?

Him: FOX News and ABC, NBC, all except MSNBC and CNN. Who would listen to stations that are going down in the ratings?

Me: What about Trump’s lack of integrity?

I think, Lord, help us! Please help this country!

I tried. I stepped out of my comfort zone and reached across the aisle – to no success. I am going to pray harder. #randomactsofinteraction, #comfortzonesucks, #visibleunity, #lovetrumpshate 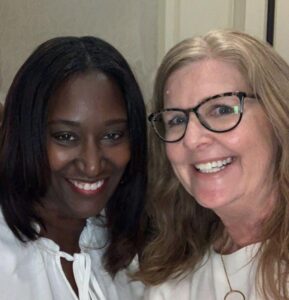 My most recent Random Act of Interaction came a few weeks ago, somewhat by accident. At the Retirement Dinner for a dear friend from high school, I sat with members of his family. Kita sat next to me, and everyone at the table joined in a conversation about parenting and grand-parenting. I expressed a couple of thoughts based on my complete lack of inexperience in either department. Somehow, I mentioned that I had gone through a relationship difficulty many years ago. Kita noticed the comment, and asked me to talk a bit more about my experience. As we talked, I learned that she had a similar, but more recent experience. A spark went off in my heart. As much pain as I went through so many years ago, I could see a way to express to her the things that helped me cope, and the joy I now feel, having emerged on the other side. She also helped me to see the strength she has, knowing who she is and wanting to be true to herself. It was a wonderful, bonding experience that only happened because Kita was willing to step a little outside her comfort zone and engage with someone that, on the surface, seemed to have very little in common with her. Thank you, Kita. And thank you, Visible Unity, for giving us a place to record these experiences. Take the challenge, and then record your experience on social media, or www.visibleunityinc.org, with hashtags #RandomActsofInteraction and #ComfortZoneSucks so others will be inspired by your story.

Random Acts of Interaction Challenge! I did it!

Random Acts of Interaction is a challenge that forces one out of their comfort zone to interact with a person one normally would avoid. Below is a readout of my interaction. Now, I challenge you.

I attended Girls Night Out, a monthly get together of about 20 women of diverse backgrounds and ethnicities. My dear friend Sylvia organizes the monthly gatherings and although I am not always able to attend, I love the idea of women getting together to do fun things. No husbands, no children, no work, just pure female fun!

When I arrived at the restaurant all the middle seats (where you can dally in the most conversations) were taken so I took a seat at the end and sat across from a lady who had a very heavy accent. Let me be honest…I do not like to speak with people with heavy accents. For me, it is hard work and exhausting. I have to slow my thinking, stall my assumptions, keep my focus on the speaker, and avoid distractions all while trying to decipher words. As I said, exhausting! It doesn’t take long for me to reach listener fatigue. So I started looking around to see where else I could sit but there were no other seats.

I had previously spoken with Pam and Cindy with Visible Unity about Random Acts of Interaction, a program that forces one to get out of their comfort zone and engage people we normally would avoid. For me – people with heavy accents.

So since I was stuck, I decided to challenge myself to converse with Esther, the lady with the heavy accent. Guess what? It turned out to be a robust, personal, and fun conversation. I learned she was fasting which was something I had been thinking and learning about. She freely shared her fasting experiences and offered some tips. In addition, I learned we both attend small group home bible studies and she actually hosts her group in her home. Finally, we talked about our professions and I jealously learned she had retired after serving for so many years as an educator and principal. It was an amazing time of fellowship and I was so glad she wanted to take a selfie with me at the end of dinner.

As I was driving home that evening, I thought about how I would have missed out on the opportunity to get to know Esther if I had ignored her and stayed in my comfort zone or found another seat. Had I not been willing to intentionally interact, I would have missed a most delightful time of sharing.

Thank you Visible Unity for challenging us to interact with people we normally avoid. My life is richer for the exchange. #RandomActsofInteraction, #ComfortZoneSucks.

#RandomActsofInteraction #ComfortZoneSucks I took the challenge.
In working with Visible Unity founder, Pam Fields, I have learned that my life is not as diverse as I perceive it to be. It is also not as diverse as I would like it to be. I think we all tend to gravitate to encounters and situations that will keep us in our comfort zone, and therefore in a place where we interact with those that most resemble ourselves.

If you have ever had the “pleasure” of spending time in the Central Jury room of the George Allen Courts Building, you know it is very large and most times very full of a diverse group of people. Normally, I select a place where I can sit by myself, with ample space on either side of me. Even then, there is always the risk that someone will sit down beside me, but I would rather just do my duty in my own space, with minimal distractions.

A few months ago, I showed up for jury duty and the place was packed with people. Getting a seat with some amount of personal space would be next to impossible. It was time for Plan B; pick a seat mate. It would have been easy and comfortable to sit next to a group of women that were near my age, and the same skin color as me. But Pam entered my head. What if I pick the seat next to someone different? Different generation; different skin color; different gender? What if I not only did that, but stepped past them, as they sat on the end of that row, and then sat right next to them?

So that is what I did. I asked this gentleman if I could step past him to take the seat right next to him. We did not have a deep, meaningful conversation. After all, it was jury duty. But I did learn something about him. This was the first time he had ever received a jury summons. He has a school-age daughter. He took the bus to get to jury duty, which likely meant he had to get up way earlier than me to make the trip and be there early enough to get that good end seat. Also, he was just as exasperated (and relieved) as me, when more than an hour after they selected a handful of jurors to head up to one of the courts, they announced that the rest of us were not needed, and we were released.

In retrospect, I truly wish I had formally introduced myself, and asked for his name. But I did learn that even if you do not know someone’s name, you can still get to know a little about them from a short, casual conversation. I also learned that most people, if approached in a friendly manner, will share a part of their story and enrich you. I hope he found this Random Act of Interaction enjoyable as well.

I was having a marketing meeting for Visible Unity yesterday at the coffee shop inside a used book store. An older, white gentleman approached our table of three black women and asked what we were so dutifully working on. Eventually, we were able to share about Visible Unity’s work. He shared about in his younger years he traveled a lot with an African American man going to golfing tournaments. He left but later came back and interacted some more. A positive interaction and he didn’t even know about the #RandomActsofInteraction challenge. He lived up to it well.