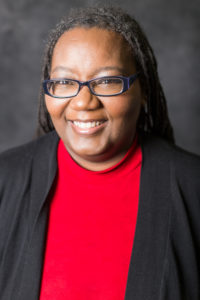 Pam Fields
Founder/President of the Board

Pam leverages more than 20 years of non-profit and government experience in her role as president of the board. Having worked in the areas of community and civic engagement, humanitarian efforts, project implementation and expansion, and project and program review, she is well equipped to manage the immediate and long-term focus of the organization. In addition to providing leadership, Pam actively implements the Unity Process and Visible Communities events, as well as consults and trains in a variety of settings related to topics around race and diversity. She holds a B.A. in Religion from Paul Quinn College, a Master of Arts in Global and Contextual Studies and a Certificate in Spiritual and Personal Formation from Bethel Seminary. She plans to graduate in May 2020 from Bethel with a Doctor of Ministry in Global Leadership. She also holds Certification as a Peace Ambassador and is an ordained minister. She has served with the United Way of Metropolitan Dallas, Garden of Gethsemane Center, Greater Dallas Community of Churches, Community Partners, Faith Forward Dallas at Thanksgiving Square and Truth, Racial Healing and Transformation – Dallas.

Cindy Ford
Chief Operating Officer, Rogers-Ford, L.C.Treasurer/Finance, Visible Unity
Cindy has worked with Rogers-Ford, L.C. for over 18 years.  Her current position with the Architecture and Interior Design firm is Chief Operating Officer.  Her responsibilities include implementing marketing strategies; coordinating trade show activities; overseeing accounting functions for the firm; and other business administration functions. Prior to joining Rogers-Ford, Cindy worked in the investment field with Raymond James and Dain Rauscher (now RBC). She has served on non-profit boards for over 19 years, including the Leslie K Bedford Memorial Foundation and Big Thought.  She has served in her current position on the board of Visible Unity for almost 4 years.  Cindy’s newest project is the formation of an organization called Finding Bill designed to help African Americans gain the training and resources needed to find their ancestors and explore their family history.

Joel Pulis
Teacher, Trinity Basin Preparatory (Ledbetter campus)
Joel is a life-long resident of the Oak Cliff neighborhood of Dallas and has served his community as a pastor, nonprofit leader, and classroom teacher.  In 2002, he founded The Well Community, a congregation of adults with serious mental illness, where he ministered as the Community Pastor for a decade. Joel launched Body Oak Cliff in 2012 where he served as Executive Director, seeking to empower everyday people to embody God’s love in the everyday. Both organizations – Body and The Well – continue to operate, but Joel felt a calling to teach.  In 2018, he became an elementary school teacher at Trinty Basin Preparatory, an Oak Cliff charter school. Joel has served in multiple community leadership roles in his neighborhood association and with the YMCA and has served on the board of Unite Greater Dallas.  He joined the board of Visible Unity in 2020.

Jeanne Segrest
Mindfulness Meditation Teacher, Stay-at-home mom of four
Jeanne is a former educator, having taught Kindergarten, fourth, fifth, and sixth grades.  She is currently a stay-at-home mom to four children who keep her very busy.  She is a certified Mindfulness Meditation Teacher and has a passion to bring the various benefits of mindfulness into her community.  She holds a monthly mindfulness workshop in East Dallas as well as one at Incarnation House, an after-school program that serves the needs of homeless and housing-insecure youth. She participates in a monthly multicultural women’s book group which has been the source of dear friendships and great learning.

Debbie Lewis
Debbie Lewis joined the Visible Unity (VU) Board in 2019. She also manages VU’s social media presence – posting, interaction & researching relevant source material. She previously served on the Dallas Museum of Art PM League Board helping to plan events like the Black and White Ball; and the Dallas Chamber of Commerce Visit Dallas committee. For many years, she managed several Property/Casualty Insurance claims offices in Texas and Florida. She, then, decided to become a freelance Writer/Editor, though currently, she is semi-retired.

Mary Ann Dudzinski
Mary Ann Dudzinski holds a B.S. in Education from the University of Dayton and an M.S. in Clinical Psychology from George Williams College. Long retired from the high school classrooms of Ohio and Texas (Plano I.S.D.) and her subsequent contributions in text book publishing (Glencoe McGraw-Hill and Holt) she now happily supports the community goals of Visible Unity.